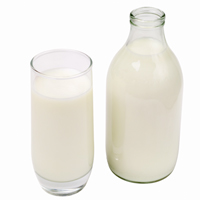 This article that came out today from the University of Chicago that leads readers to believe that milk fats can change the bacteria in the intestines which may increase the risk of developing inflammatory bowel disease. The key word of course is “may”. In the experiment mice were fed diets that had were high in saturated milk fat and 60% of the mice that were fed high saturated milk fats developed ulcerative colitis compared to only 25%-30% who were fed low fat diets.