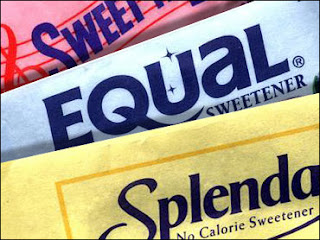 In a recent news article it came out that maltodextrin or what are known as artificial sweeteners can may make Crohn’s worse. One problem however is that the study was done in a lab and not on people which makes the link between artificial sweetener and Crohn’s loose. The logic is that the artificial sweetener promotes e-coil which is found usually found in the small intestine of those who have Crohn’s. Although, researchers don’t even know what role e-coli plays in patients with Crohn’s

The research wasn’t even really scientific. All the researchers did was place sweeteners like Equal, Splenda, and Stevia into a dish that had e-coli in it and watched it. What is interesting is that Crohn’s patients have a decreased level of mucus in their gut which could lead to more bacteria which would cause inflammation. A better designed study would be to divide up Crohn’s patients into two groups: one group that was fed high levels of maltodextrin and the other with no maltodextin and see what happens. Simply putting something in a petri dish and watching it doesn’t lead to anything useful or value added.

What also should be pointed out is that there is no conclusive empirical evidence that links diet and Crohn’s. If there is any solid evidence I would be changing my diet in a heart-beat. Although, there might be trigger foods for Crohn’s there isn’t any research suggesting that one type of food or even a group of foods benefits Crohn’s patients.

More research should be done regarding diet and Crohn’s patients. For me at least whatever I eat does seem to give me pain. I haven’t noticed one food or another giving me more pain than the other. As I like to say my gut does not discriminate it treats all food as enemies. As I mentioned in a previous blog post I didn’t eat sugar for one week and by the end of the week felt worse.
Posted by Crohn's Zone at 4:17 PM