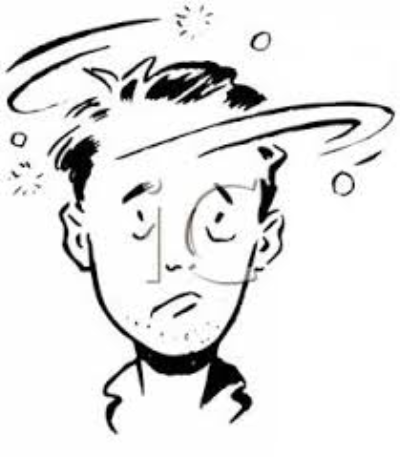 So this week has been interesting from a medical perspective. Last week I was feeling quite dizzy and my head felt as if it was moving up and down. Honestly I wasn't able to concentrate that well and had issues just remembering things. My internist recommended I see an ENT. Luckily I called the ENT office this past Monday and was able to get an appointment for Tuesday afternoon. My appointment was for 2:30 P.M. and I didn't get out of his office until 5:30 P.M. When I was describing my symptoms to the doctor: I told him I felt dizzy and it seemed to get worse if I moved my head side to side and up and down. He examined my ear and removed excess wax in my left ear. After I had the waxed removed I had a series of hearing tests performed (this was over an hour) and I had to repeat words, say if I heard certain beeps, and determine which side I was hearing the noise from. I probably spent more time on this hearing test than all of my other hearing tests combined. The ENT looked at the results and noticed that my hearing on my left ear was lower than normal and I explained to him that historically that has been the case. The doctor believed I could possibly have nerve damage although unlikely and wanted to order an MRI. He also diagnosed me with BPPV which is a form of vertigo (I had never had this before in my life. I went home and looked at some vertigo exercises on YouTube and think they seem to work. For this I would go to physical therapy. I went to physical therapy on Thursday and that was pretty good. The physical therapist checked me for BPPV and said I didn't show any signs of it but that I could feel some spinning and dizziness as an after effect of the BPPV.

Today I went for the MRI (after spending $658 for it-and honestly I am not sure it was necessary but it is better to be safe than sorry). The procedure wasn't too bad. I had an IV in place and they ran the MRI with and without contrast. You just sit in this small space and this machine that makes extraordinary loud noises spins around. The technician provided a blanket and headphones with alternative music-I wasn't a fan of that part. At first I did notice my heart start to race but then settle down. After about 30 minutes I was done and they told me to drink plenty of fluids too when I got home. I did notice after the MRI some minor pain in my stomach that I didn't have before (not sure if this was from the contrast or the MRI itself). I felt fine when I returned home and was able to work out this evening.

Earlier this week I also went to my GI for an update visit. Typically I visit him once a year. He told me I looked super but the last time I had a colonoscopy was in 2011 and I was due for one this year. I told him I had been watching videos on YouTube of competitive eaters and his comment was "Well if you are going to be good at something you might as well get paid for it". This honestly doesn't bother me as I am curious to see what my colon looks like as a normal case in remission and not in a severe flare or have c difficle.

All in all this has been an interesting week medically speaking. With all the doctor appointments and medical visits I had this week kept me pretty busy. It is good to know now I am back to normal and feel well. Over time I have come to expect minor issues like this. However, I always know it is best to push through and know that it will always get better as it usually does.

On a more personal level I am moving next week after living in the same apartment for over 4 years. This welcomed change should be nice as I am moving to a highrise condo. Life is interesting and we have to make the most of it since we only get one shot in this world.

Well I haven't blogged in a while (since I have been feeling good). However, this past week around  Tuesday morning I woke up at 3 A.M. went to the refrigerator and was stumbling to get back in bed since I was dizzy and could feel my head spinning. My initial impression was I had vertigo based on everything I read. I never had felt anything like this before. I called my doctor's office and let them know and was able to see my doctor the next day. I went into the office and had mentioned I felt lightheaded and just tired. My doctor looked into my ear and noticed I had a bunch of wax in there. He said I was exhibiting signs of vertigo but there are different causes of it. I had my ears flushed in December 2017 (my first ever) when I was noticing pressure difference and popping in my years). After my ears were flushed I noticed the issue went away. So my doctor called in the nurse and she flushed my ears. After my ears were flushed I noticed an improvement. The day after I didn't feel as dizzy and today I don't really feel much dizziness at all. I felt as if my right ear is better but my left ear still isn't 100%

Today I went to work but felt out of it mentally. It is one of those situations were you are there physically but not mentally. It has been also harder to concentrate as well. The past few nights I have been falling asleep pretty early too and don't have my usual normal energy. It feels as if my mind is cloudy. At times I do have moments of energy but still not what it was before. I might try to work out later as it has been a while and maybe that will help things. It really is never fun felling tired.

Hopefully this is a short term set back. I plan to relax this weekend and won't do a whole lot and just rest as I feel pretty tired. Also I feel a little down since I am not 100%. Over time I have learned though that most of these things come and go. I might call my doctor Monday if I am still feeling this way though.
Posted by Crohn's Zone at 4:38 PM No comments: