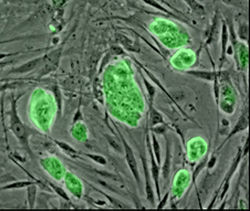 Some good news came out of this press release. Dr. George McDonald of the Fred Hutchinson Cancer Research Center announced that they are starting a trial to look at whether bone-marrow transplantation can cure people who suffer from Crohn’s disease. Cure is always a deceptive word. As I learned in economics there are no cures only tradeoffs. The idea is to get the best possible result given tradeoffs faced.

The idea is to swap out the old immune system for a new immune system. The procedure known as allogenic hematopotietic cell transplantation has since the 1970’s.  However one of the major concerns has been the risks including side effects and possible death. According to this November 25, 2010 article in the New England Journal of Medicine 1418 patients received transplants from 1993-1997 while 1148 patients received a transplant between 2003 and 2007. Interestingly over time as knowledge improved and techniques got better mortality decreased overall by 52%. The people that were studied had some serious illnesses such as leukemia, multiple myeloma, and lymphoma (I don’t believe people with Crohn’s disease were studied). I suspect as time goes on the procedure will only become more effective and less risky just as other procedures do.

Some people claim this would be a cure for Crohn’s however I am skeptical of this. In this 2010, that George McDonald did 96% of patients did not relapse after 1 year, 63% at 3 years, and 36% at 5 years. This tells me that even though the immune system is rebooted so to speak that in time it becomes less effective. Although, I wonder if that 36% has anything in common. It would be interesting to study the genes of these people before the treatment to see how different people would respond to the treatment.

Crohn’s patients should welcome new trials as these may be helpful to Crohn’s patients around the world. However, at the same time we should be skeptical of procedures until many trials are done and their effectiveness is shown.

For more information on this trial click on this link
Posted by Crohn's Zone at 8:38 PM