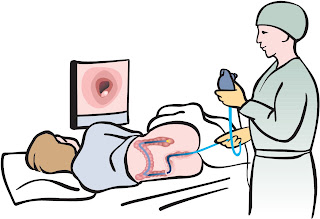 So the past few weeks of my health has been both good and bad at the same time. The bad is I have been having diarrhea. Around 2 Mondays ago I actually had to go to the bathroom 7 times in one day! On that day I took a warm bath and actually felted cured (for about a day). The other side effect was I had a pain in my backside which has happened before but made worse by the fact that I was always having to go to the bathroom. The only other recent symptom I have noticed is when I lay down sometimes my upper chest hurts a little (however I think this too has past. My gastroenterologist did some blood work and a stool analysis and noticed my white blood cell count made him “nervous”. He scheduled a colonoscopy which I happily did today. The prep is always the worst part. At 5:30 PM I started by prep and by 8:30 P.M. I finished 6 glasses of Gatorade + Miralax + the 4 pills. Honestly the first one seemed like twice as many liquids.  I did my first one on November 30, 2011 and this one was done today (January 29, 2013) so a little over a year since they have been done. Personally I would not mind doing them every couple of years just to check and see how things are going. Today was somewhat of a blur since I got up at 6:00 A.M. my parents drove me over to the medical center. I remember looking at a clock that said 8:03 A.M. and then saw my GI in a cold room where they gave me some sleepy medicine and I was out and woke back up again (the procedure only took about 20 minutes).

The discharge from today had some findings on it. Finds were “Normal mucosa in the rectum” “Inflammation was found from the sigmoid colon to the cecum. The findings are improved compared to previous examinations. This was biopsied”. “The examined portion of the ileum was normal”. “Biopsies were taken with a cold forceps for evaluation of microscopic colitis”. My GI said there was still evidence when he looked inside that there was still Crohn's however the inflammation really seems to have gone down.
It looks like Humira is still working despite the diarrhea. My GI talked to my parents while I was in the twilight and said my diarrhea could be controlled with some Imodium which I had been taking for a while. The worst case was moving Humira up to once a week which I don’t mind either. My GI is suppose to call me with the results in a week or so.  Will have to wait and see.
It is somewhat strange I had diarrhea however no pain. To me it seems more bacterial than a Crohn’s problem. Hopefully this will only be temporary and I can get out of this little funk I am in. Living with Crohn’s does always make life interesting.
Posted by Crohn's Zone at 11:17 PM