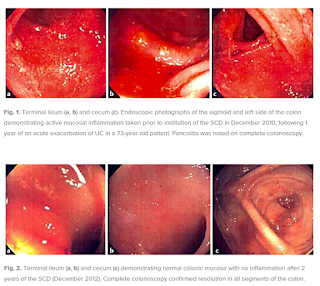 So for years I have heard about the specific carbohydrate diet (SCD). Initially I was skeptical about it given there wasn't lots of evidence looking at how much it actually impacted people with Crohn's or ulcerative colitis. The specific carbohydrate diet is a very strict diet that is based on the theory that carbohydrates, dairy, and sugar products cause inflammation when trying to be digested. Also it should be noticed the SCD has no dairy or grains so your body somehow has to make up the nutrients for this absence. A book was written about the topic called Breaking the Vicious Cycle by Elaine Gottschall who had a daughter who had ulcerative colitis. After about 10 days her daughter started to show improvements. Within 2 years after starting the diet she was symptom free.

The issue I have had with SCD is that there wasn't really any data outside of patient stories claiming that it worked to support whether or not it worked. What I wanted to see was a before and after of colonoscopy images taken before and after the diet to measure the difference. For years I had been trying to find this from people who claimed they were "cured" (in remission a while).

I came across a case study that was written in the Case Reports of Gastroenterology of a 73 year old woman physician who had ulcerative colitis since 1997. After usual therapies failed she started the SCD diet and within 3-6 months saw improved. Within a year no pain or diarrhea occurred. For her diet she excluded wheat, soy, barley, corn, and limited rice. Her main meals consisted of fish, lean meat, fruit, and non-starchy vegetables. After 2 years of being on the diet a colonoscopy was performed and there was no evidence of inflammation.

Another study from October 2014 in the Journal of Pediatric Gastroenterology and Nutrition showed clinical and mucosal improvement not only after 3 months (75% of patients were in clinical remission after 3 months) but even a year (85% of the patients who remained on the diet were still in remission) after they started the SCD diet. What is interesting is that 10 child patients started the study and only 1 dropped out since they were not able to comply.

A study of 50 patients in the summer of 2015 from Rush University that was done on patients who were in remission showed that 52% of Crohn's patients were able to stop medicatons. What I found interesting is 66% of patients said it took on average about almost months before there symptoms were resolved.

This fairly recent study from November 2015 with again pediatric patients with inflammatory bowel disease showed improvement for both Crohn's and ulcerative colitis. Of course as with all studies the common disclaimer of saying that more studies have to be conducted to assess the safety and efficacy is needed.

In my own treatment plan I would use it as a back up to a back up plan and just see if it had any effect. Personally I would find it very hard to give up some of the foods I really enjoy: Mexican, chocolate, etc. With that said I have made improvements to my diet from my pre-Crohn's days of adding more salads, vegetables, and some fruit to my diet. Also I would say I am more mindful of what I eat than before I had Crohn's.

My own belief is that a SCD diet can help inflammatory bowel disease. Although, there is only some evidence that it helps I am open to the idea that it could improve the lives of patients with both ulcerative colitis and Crohn's disease. Doctors are not open to this idea of course. I personally would like to see more evidence with more patients. It would be really nice to see more data and studies showing that SCD diet was helpful to add yet another treatment for inflammatory bowel disease. Maybe scientists could even develop a drug to mimic the effects of SCD diet.