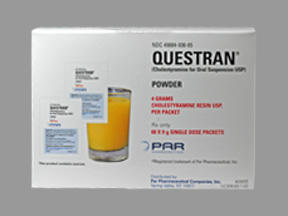 So I haven’t been writing (due to being constantly busy for the past few weeks and months). I was able to sit for my board exam this past weekend and able to take it (10 hours for over 2 days. I only had to go to the bathroom twice the whole time which I thought was amazing for someone who had Crohn’s. So my GI put me on Questran (Cholestyramine) which at first I didn’t think would do anything but seems to have stopped my diarrhea which started January 6, 2013 (which I believe was from the antibiotic I took). It seems to have started working within a week after taking it I started the Monday before last and the past 2 days has stopped all diarrhea. Online I have read people take it and it can stop diarrhea for years. The only bad thing about the drug is that it comes in orange packets that you mix with water and don’t taste that great (although I have gotten use to it). I asked my GI if it came in pill form and he said “no but that would be very nice if it did”.  What my GI doesn't know is if this is related to the c difficile that I tested positive for or if it is a Crohn's flare up. To date I have only had one flare up and I remember what that was like (in pain all the time, not wanting to do anything, and at times throwing up). I feel nothing like this. Personally I still think the c difficile explains much of it although I am curious why Questran stopped the diarrhea.My GI called me yesterday and said to schedule an appointment within a month to see him (he believes things could still be better even though I feel fine). Having diarrhea is somewhat of a pain. I have learned to clean the toilet very well which is positive.  I thought the diarrhea would go on forever and I would need a fecal transplant however I guess that is no longer needed at this point.

I feel pretty good. Sometimes I get cramps but other than that pretty normal. I guess the other side effect is that since I no longer have diarrhea I am gaining weight which is good. The road for Crohn’s is always uncertain and I really do appreciate I am feeling great now since I know I could have a flare up any day. Although I did read somewhere if you don’t have a flare up within a year you have a pretty good chance of going a long time without one.
Posted by Crohn's Zone at 8:17 PM