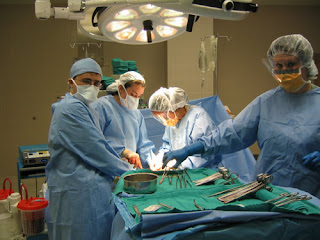 I saw this recent saw this article in the Journal of Gastroenterology (my night time reading) that studied a group of people from Olmsted County, Minnesota. The study is ongoing and looked at people from 1970-2004 (updated from 2001). The study concluded that the cumulative probably of having major abdominal surgery were 38% at 5 years, 48% at 10 years, and 58% at 20 years.  The major factors that were significantly associated with major surgery were being male, smoking, early steroid use, and penetrating disease behavior. What seems to be positive though is that if you look at this chart that shows the cumulative risk of having surgery after being diagnosed in different decades.  In recent times it seems that the people who were diagnosed in the early 2000’s who are a little below 10 years from diagnosis have the lowest risk out of all the decades of having to have surgery at around 35% (which is down from 60% which is was in the late 1970s). Also remember Humira was not introduced for Crohn’s until February of 2007 which may bring down the requirement for surgery even more. My gastro doctor had told me one time that with Humira he was seeing fewer and fewer patients in the hospital and fewer requiring surgery which fits the data. What was also interesting is that people claim Crohn’s has a genetic component to it (however even my gastro doctor said none of his patients had family members who have it and neither do I) and the data in this graph supports that as close to 86% of patients have no family history of inflammatory bowel disease.

This data makes me feel a little bit better. With the cost of genome analysis going down it might be interesting to see if certain genes affect who has to get surgery or multiple surgeries. Although the odds are by definition I will need surgery I think I will be able to handle this and hope it is years away when the technology will improve and perhaps down without a scratch with NOTES as I mentioned in this post. I will be honest the thing I am scared of most of having an ostomy bag.  I know other Crohn’s and ulcerative colitis patients worry about it and I would even be okay with a temporary one if I had to but a permanent one would scare me just a little bit.
Posted by Crohn's Zone at 9:51 PM