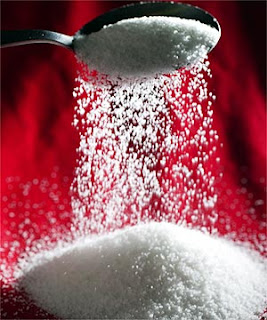 Today is Saturday and since last Sunday I have not eaten sugar. This chance hasn’t really brought any distinct difference in how I feel in terms of pain. However, I do feel healthier. I actually did surprise myself considering I had cookies, Frosted Flakes, and other goodies in the pantry along with milk in the refrigerator. I thought I would have withdrawals however didn’t. Even though I haven’t eaten sugar in almost a week it is still on my mind. Right now I wouldn’t mind a brownie sundae.

I was curious about the effect of sugar on Crohn’s however what I found in the academic literature was mainly sugar intake at the diagnosis of Crohn’s. This study done in 1980 showed that in interviewed 120 people with Crohn’s and found that patients with Crohn’s ate more sugar than those with ulcerative colitis when interviewed. Meanwhile this 1983 study showed that Crohn’s patients not only consumed more sugar at the beginning of diagnosis but also consumed significantly more sugar after diagnosis. However in this April 1998 study that appeared in the European Journal of Clinical Nutrition it was found that “There appeared to be no clinical advantage to the use of reduced sugar diets in Crohn’s disease treatment”. This study however was funded by The Sugar Bureau how does want to make sure everyone is getting their daily dose of sugar. I found this 1981 study that had no sponsorship which concluded that “The increased consumption of added sugar in patients with Crohn’s disease does not appear related to other dietary abnormalities and may simply reflect a deficiency perception of sweet taste in patients with this condition.” One possible theory may be that the body in Crohn’s patients absorbs sugar differently.

What seems apparent from the literature is that Crohn’s patients have higher sugar intake once they get Crohn’s however if they reduce their sugar intake it really doesn’t make a difference. It is interesting to know why this is. Perhaps someone could do a long term study measuring sugar intake through blood tests and see if there are any changes in symptoms. I personally have not eaten sugar for the past week because of the health benefits. The only side effect I have noticed is feeling a little bit more tired however I feel cleaned out in a way. No doubt more research has to be done on the impacts of diet and Crohn’s. However, the evidence seems that diet doesn’t make much of an impact on Crohn’s patients.
Posted by Crohn's Zone at 11:54 PM