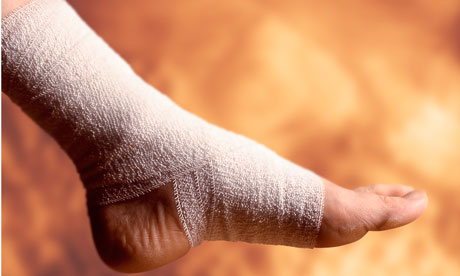 So Wednesday night (June 5, 2014) I was working out at the local apartment workout center and after I did my work out I was coming off the elliptical machine and came down the wrong way and ended up on the ground in pain. I knew right away I had sprained my ankle. I was on the ground and then got up and was a little light headed. So I found the closest bench I could find and just took a rest there. I was able to get out of the work out room (actually in not much pain). I went back to my apartment and put some ice on it and did some research and saw raising the sprained foot also helps. The pain the first night I had the sprained ankle wasn't too bad. Although, I did wake up around 2 A.M. Thursday morning and felt like someone had stabbed my foot. On Thursday morning I could barely get out of bed. I called my mother and said I probably should go to the doctor. I then called my internist and he was on vacation so I was able to go to an emergency care center in town.  The wait time was really quick as no one else was waiting. A nurse asked me what drugs I was taking, what hurt, and how it happened. A doctor came in and then said he would take x-rays. I was taken on a stretcher to get some x-rays done which didn't take long. The results were sent to a radiologist and the doctor came back with the results within a few minutes which was quite impressive.

This morning (June 6th, 2014) I woke up for work and actually felt pretty good. My ankle did have some pain and was bruised but was an improvement over yesterday. I am not back to normal and still have to walk slow but I should improve over the weekend.

The doctor wrapped up my foot and I was given crutches to take home (they a pain to use). I asked the doctor since I have Crohn's is it okay to take Tyenol and other NSAID (non-steroidal anti-inflammation drugs). So let me take you back to the fall of 2011 when I had Crohn's but actually didn't know I had it. I was in constant stomach pain all the time and must have taken multiple bottles of Tylenol Extra Strength which may perhaps made my condition worse. I still remember going to Walgreens to get some more Tylenol thinking how much of this stuff can I take? Growing up however I hardly ever used Tylenol or medications in general for pain. I called my gastroentrologist to ask if I could take Alieve. His office replied back within 15 minutes after asking him and he said it was okay to take. So I took Alieve and I did notice some cramping a little after. Tonight (June 6th, 2014-2 years to the day I started Humira) I did notice a loose bowel movement (however I did have chocolate ice cream which usually gives me the best chance of having a loose bowel movement). I take my Humira injection tomorrow night which should put me back on track.

This study from 1987 shows that 4 patients that had inflammatory bowel disease that were given nonsterodial anti-inflammatory drugs had prompt exacerbation of their disease. This meta analysis (a grouping of all the studies that have been done) showed in 2004 that some patients had a flare after taking NSAID drugs. I think there is no evidence one way or the other, however given I felt some cramping after taking Alieve I will try to stay away as much as I can from taking NSAIDs until I see data to prove otherwise.